Jericho off the record

From 1952 to 1958, Kathleen M. Kenyon conducted the well-known excavations at Tell es-Sultan (ancient Jericho), located in the present Palestinian territories. This expedition was significant for the development of archaeological methods and techniques, as well as for the knowledge of the habitation history of the Jericho Oasis. Kenyon paid more attention to stratigraphy than was common for the archaeological world of those days, and introduced the Wheeler-Kenyon method into Palestinian archaeology. Thanks to the outcomes of this campaign the habitation period of the tell was shifted from the Bronze Age and Neolithic to the Natufian (10,500-9000 BC). The spectacular finds relating to the walled village of the Neolithic early farming community (9000-6000 BC) even lead Kenyon to claim to have exposed ‘the earliest town in the world’. 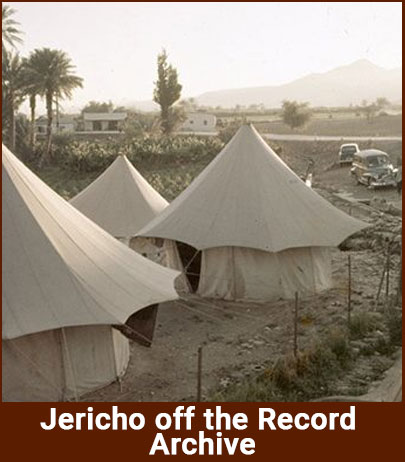 As usual, the archaeological campaign was documented by official appointed draughtsmen and photographers. The surveyors and field assistants made notes in their notebooks about the stratigraphy and finds, which were collected by Kenyon at the end of every season. Based on these (official) notes, photographs and drawings Kenyon published several excavation reports and articles. Excavations at Jericho, the final report of the expedition, was published in five volumes between 1960 and 1983.
Besides these official records made and gathered by order of Kenyon, the members of the expedition made many private records on their own initiative during the excavation. Unfortunately, these so called ‘non-professional’ documents, which include photographs, slides, notes, letters, drawings, and – not to forget – the member’s memories, have generally been neglected in the past. The fact that they were stored in private houses, not in official archives, made that over the course of time they slowly got forgotten.

For that reason the project Jericho off the Record, initiated by the NPAPH project, will trace the former participants, or their heirs, gather, study and digitize their records made at Tell es-Sultan, make the digital resources accessible to the public and archive them for the future in a national data repository. Since it is still a project in progress and we are about to analyse and study the records gathered so far, the data set is as yet partially accessible. However, on basis of the records gathered by NPAPH two short films about the excavation at Tell es-Sultan have been created. Watch them now!